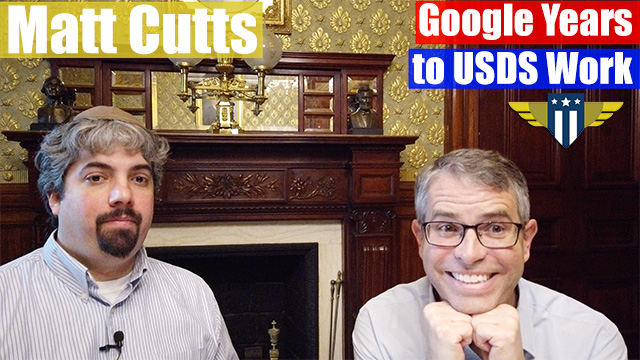 Note: The first 5:45 of the video is my trip there, you can skip to the interview at the 5:45 mark. I made sure this video was completely unedited outside of the b-roll stuff before and after. Matt Cutts loves doing “one-takes” and actually, so do I, so we went with it. I did review the questions that I wanted to ask Matt prior to pressing record and full-transparency, we did skip some questions that he did not feel were appropriate to discuss for one reason or another.

Matt Cutts (@mattcutts), former head of web spam at Google and currently the Administrator of the United States Digital Service. Yes, he works in what Wikipedia calls an “elite technology unit” housed within the Executive Office of the President of the United States. We met in the Secretary of War Suite within the Eisenhower Executive Office Building, which is in the back yard of the White House – literally a couple of minute walk. I even stopped by and visited the VP’s office – he was conveniently not there at the time.

Matt was one of Google’s first employees and he is most well-known in our industry for being the GoogleGuy who bridged communication between the Google search team and the SEO and webmaster community. In the early days he did it single handedly but now, partly thanks to Matt, there is a whole team of people at Google that do this as part of their daily jobs. He worked at Google between 2000 and 2016, but took a leave from Google in 2014 and officially left the company in 2016. He has since been with the USDS, United States Digital Service, with the goal of making governmental web sites and systems easier for users to use. So from working on a search engine used by millions of people, to working on systems in the US that are used by millions of people – he likes to go big and help in a big way.

The first part of the video we discussed his childhood. He grew up in eastern Kentucky. His father was a physics professor and his mother an evangelical Christian, and an older brother who is a mechanical engineer and an electrical engineer. He got a degree in computer science and mathematics at University of Kentucky, then went to University of North Carolina at Chapel Hill and did computer graphics and virtual reality. To his father’s dismay he never got his PhD, but did get a masters.

Then we moved into his career where we discussed his first job was working at the NSA as an intern for four semesters. His first real job was at Google and left Kentucky and went to California. He applied to Google while in university, he was learning about information sciences and was super interested in what Google was doing with search. He got married, took a honeymoon and drove across the country all in a single month – it was a busy time.

His first real big project was working on safe search. It was completely text based, to figure out how to hide unsafe images. He then worked on ads for a year and he told how he got assigned to working on that. The whole ad platform worked off of one single server named F41 at Google. He then started the quality group at Google.

He saw from his work on SafeSearch that people were taking advantage of Google. One example was an expired domain that had high PageRank and was able to rank well because of that. That was his epiphany that Google could be spammed.

During his 20% time started GoogleGuy to answer questions in the forums – specifically WebmasterWorld, debunk myths and clarify misconceptions about how Google search worked. He did remember mistakes he made around communication with SEOs, referring to SEOs back in the day as watching people juggling chainsaws; it’s entertaining when it goes well and really bad when it doesn’t go well.

From 2001 to 2003, he said multiple people were thinking about the quality of the search results. In 2003, lots of stuff went badly with search quality he said. He said what kicked off the executives caring about this was around the time Orkut launched in early 2004. Slashdot was asking why is Google working on a social network when they have problems with search quality.

Matt explained that one reason he opened dialog with black hat SEOs was to get inside information from these folks. He would get a lot of good intel. He also said it was a source of good will towards the industry. We talked a bit about the naming conventions of Google updates and how we had fun names in the old days and now we have these boring names; thanks Danny.

You can see how modest he is when we talked about the Cuttletts and how he was swarmed at conferences. He genuinely misses the community. Some people have spoken to him off the record and then went around behind his back and published everything they spoke about.

We then compared how thick our skin are. He told me a story how he was approached and threatened in a serious way at a search conference. This is why he started carrying a cell phone with him all the time, for security. It ended up being a misunderstanding but can you imagine, where the scammer was scammed by another scammer. I think, at least in the SEO community, this has got a bit better.

Leaving Google after about 17 years was hard and tricky but it was the right time he said. But he looked at his career of tons of iterations, which again is him being humble. He mentioned doing all those early videos with Wysz, amongst other things.

I asked him about what he wished SEOs understood that they may have not known over his career. It is not just about making the best site with the best content but the hockey metaphor about skating where the hockey puck will be. Be head of other people by being there before others start doing it. Your biggest win will be by coming up with a way to set your site apart and that will end up having the biggest ROI for you, he said.

USDS, United States Digital Service, does just that for the US government web sites. Matt and his team think about how his team can help the most people with the most need. We discuss what the USDS does, the biggest project they worked on was healthcare.gov and fixing that site in the early days. The USDS needs more help from coders, program managers, content strategies and the like. He joined the USDS because he saw people he respected joining the team and he tried it out and he stuck with it so far. He said working at Google did help him with his work at the USDS.

Matt explained how SEOs and SEMs can help the USDS, including content strategists, being able to communicate clearly, those who can get results quickly are all welcome to apply at usds.gov/apply.

It is amazing how much Matt Cutts has done in his career from his work at Google, the SEO industry, and now the Unites States. Matt is an honest, caring, giving and respectable individual – we are lucky to have had him as a big part of our lives for so many years in the SEO space.

I hope you liked this interview:

You can subscribe to our YouTube channel by clicking here so you don’t miss the next vlog where I interviews. I do have a nice lineup of interviews scheduled with SEOs and SEMS, many of which you don’t want to miss – and I promise to continue to make these vlogs better over time. If you want to be interviewed, please fill out this form with your details.